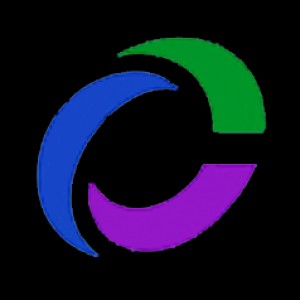 Tour Operator «CA-MILLE TOURS EXCURSIONS» (Uzbekistan, Samarkand, License № 717-11 "Uzbektourism" and a certificate - for all kinds of activities in the tourism sector, is pleased to offer you a wide range of tourist services) welcomes you welcome to our country!
We are a young tour operator, but our experts have been working in the field of international tourism for more than 25 years of reliable partners, both in the region of Uzbekistan and Central Asia (Turkmenistan, Kyrgyzstan, Kazakhstan, Tajikistan).

Itinerary: … – Tashkent – Bukhara – Samarkand – Tashkent - … Day 1: … - Tashkent Arrival to Tashkent at … transfer to the hotel. Check in time at 14:00. Short sightseeing tour in Tashket, visit center of Tashkent, Old City part of Tashkent with Khast-Imom Complex and Chor-Su bazaar. Dinner. Overnight at the hotel. Day 2: Tashkent-Bukhara (600 km) Transfer to airport at 0600, Morning flight to Bukhara at 0740-0850 by HY1337. Arrival to Bukhara and transfer to the hotel. Sightseeing tour in Bukhara. Visit Samani dynasty mausoleum, Arc Fortress, Chashma-Ayub, Kalon ensemble, medrese Miri-Arab, Magoki-Attori mosque, medrese Ulugbek and Abdulazizkhan, trade domes, Lyabi Hauz complex, medrese Chor-Minor. Folklore and Fashion Show – included. Overnight at the hotel. Day 3: Bukhara Visit Bahauddin Naqshbandi complex, Chor Bakr complex and Summer palace of Bukhara Emir “Sitorai Mohi Hossa”. All the places you mentioned are in Bukhara at Bahauddin Naqshbandi comlex, they can visit the places and graves and meet local people who do pilgrimage there. Day 4: Bukhara-Samarkand, (290 km, 4hrs) In the morning depart Bukhara and drive to Samarkand. Arrive in Samarkand, check in hotel. Visit Gur Emir mausoleum, family graveyard of Temur and his sons, teacher and grandchildren. Supposed to be the hanaka of his grandson Muhammad Sultan, but due to sudden death of Temur and due to other cistcumstances became the grave of Temur and his relatives. Famous Registan Square-known from the 13th century AD as a bazaar square, was the centre of trade and cultural life in medieval Samarkand. It is surrounded by 3 madrasahs of different periods. Day 5: Samarkand-Tashkent, (297 km, 2.1 hrs) Full day sightseeing Samarkand. Samarkand, the capital of ancient Sogdiana, is one of the oldest cities in the world, of the same age as Rome, Athens and Babylon, estimated 25 centuries old. During those centuries the city has survived many great and dramatic events. Samarkand saw Saka and Massagets, Greeks and Macedonians, Karakitais, Arab commanders and hordes of Genghis Khan. Under Amir Timur's rule, Samarkand became the capital of his huge empire. The Great Silk Road went through the city. Hsuan Tsang visited Samarkand on his way to India. Bibi Khanum Mosque, built by Temur and devoted to his favorite wife, however other legends say that it was built by his wife as present to him for his successful invasion of India in 1399. Bazaar, Shakhi-Zinda Complex, Ulugbek observatory. Afrosiab Site & Museum: It is the area of 212 hectares mostly hilly surrounded by a moat. Here was situated ancient Afrosiab (old name of Samarkand). It had existed from 6th century BC till the 13th AD. Now archaeologists here continuously conduct excavations. The museum displays: the model of ancient city and fortress walls, pottery, weaponry, coinage, altars and most of all the mural painting of the 7th century. Transfer to railway station at 16:00. Drive to Tashkent by express train (departure time at17:00, arrival time at 19:10). Transfer to the hotel and dinner. Overnight Day 6: TASHKENT - …. Free day in Tashkent, check out at 1200, take Uzbekistan air flight to … at ….
Чтобы проголосовать и оставить отзыв вам нужно Зарегистрироватся 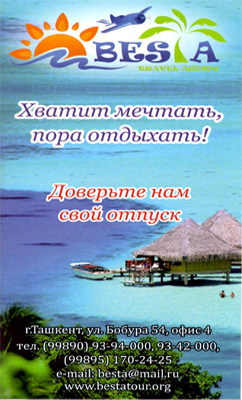